Shuttles and an official Hollywood sign viewpoint were at the core of an early draft of the plan, which will be presented again tonight.

Changes proposed by a consulting firm hired by the city’s Dept. of Recreation and Parks include monetizing some parking lots, a full shuttle service for the Park, the conversion of some streets to one-way, and measures to discourage the use of residential roads for park access.

Under the plan, the Griffith Observatory parking lot, which is currently free, would become a paid lot.

Free parking would still be available, however, in auxiliary lots throughout the park with shuttles up to the Observatory. 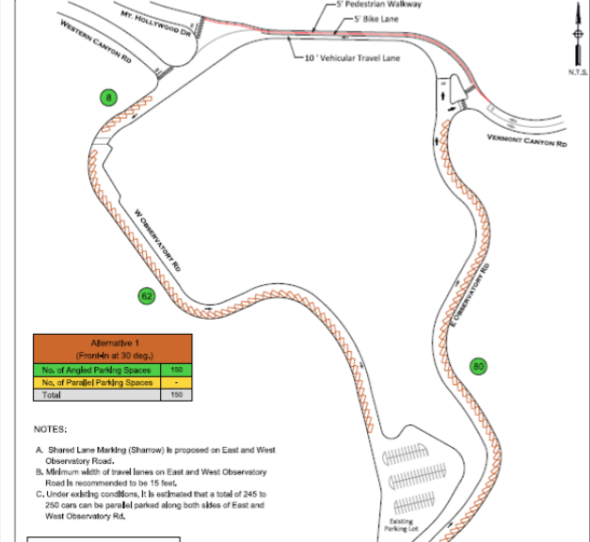 The proposed shuttle route would include stops at the Observatory, the Greek Theater and an “official” city-sanctioned Hollywood sign vista viewpoint located near the Observatory.

According to Julie Dixon of Dixon Resources Unlimited—the consulting firm hired to analyze traffic and parking solutions—one goal of the viewpoint shuttle stop would be to direct tourists seeking photos of the sign away from residential areas. This could be welcome news for residents living near Los Angeles’s most iconic landmark, as the area has been flooded with tourists attempting to photograph themselves with the sign since the arrival of GPS directions on cell phones.

Other measures in the plan to protect residents currently include adding “No Observatory Access” signage on Fern Dell Drive and Los Feliz Boulevard and training GPS algorithms to avoid neighborhoods when giving directions to popular tourist destinations. 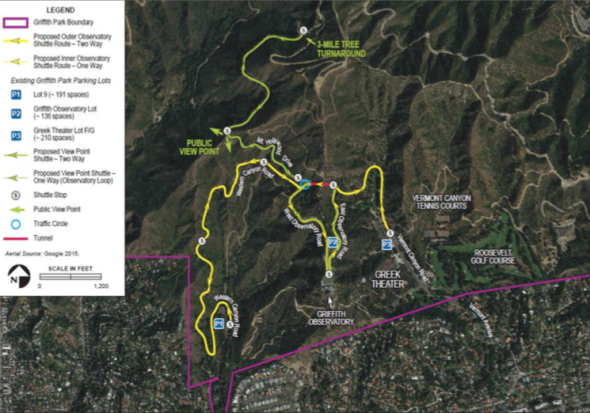 The draft stage plan was presented in December to the Griffith Park Advisory Board, an advisory body composed of community leaders to advise the city on park issues. The group expressed general support for the project, but cited some concerns.

Los Feliz Improvement Assoc. Vice President Chris Laib, who is also on the advisory board, said he was worried some elements of the plan could lead to an increase in traffic on already congested Los Feliz Boulevard and Vermont Avenue.

But Dixon emphasized that the existing plan was not set in stone and the planning process would include “ongoing stakeholder involvement and public outreach.”

According to Dixon, the project will not require a full Environmental Impact Report, but rather a Mitigated Negative Declaration—a document specific to projects that are determined to have no potential for negative impact on the surrounding area, and thus pose no need for a full study—tentatively planned for release on January 4th.

However, before moving forward with a plan, she said, the city will continue to collect public feedback at town hall meetings like the one tonight, throughout January.